Exciting Plans for a Luxury Hotel & Carousel in Downtown Carmel

As part of the vision of Carmel, Mayor Brainard has presented plans to bring both a luxury hotel to Carmel City Center and an antique, hand-carved carousel to one of our tourist areas.

Carmel officials are working to bring an Autograph Collection by Marriott hotel to the city’s core City Center that is planned to have 100 to 120 rooms and expected to achieve a 4.5-star rating. The Autograph Collection is desired because it will maintain the character of a boutique hotel while still having the support of a major chain. The luxury hotel would be located just east of the Monon Greenway and west of Veteran’s Way, just south of City Center Drive. The hotel could open in 2020.

The planned carousel is a Dentzel Company-built large park carousel with 52 hand-carved animals and really considered a national treasure. Built in 1907, the Dentzel carousel is planned to be housed in its own building, in a central location where families can enjoy taking a ride for year-round enjoyment and could include event space for private functions and public events.

Carmel is working to bring a carousel to downtown Carmel.

The City of Carmel is looking for community input via public meetings and support can be shown at the following petition link. 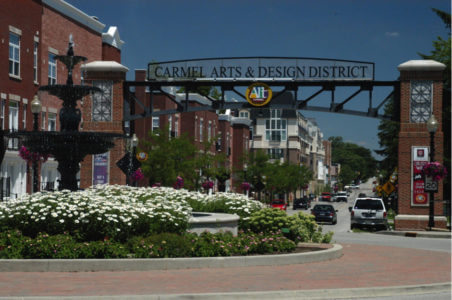 A new roundabout will be under construction south of the IDC at 4th Street and Rangeline Road.

In addition to changes to Carmel’s City Center, roundabout construction will soon be underway just south of the IDC. Please visit the construction detours page to plan your next visit.