Posted on April 12, 2017 under Site News | Comments Off on DESIGN NEWS: Drapery Street Awarded “Trendiest Customer of 2016” by Trend

Drapery Street announced that it has received the Trendiest Customer 2016 honor from Trend, a leading worldwide distributor of decorative fabrics, as part of Trend’s 10-year anniversary celebration.

“We were so honored to be the only Indiana company awarded Trend’s Trendiest Customer 2016,” says Caryn O’Sullivan, owner of Drapery Street. “Trend is one of our favorite resources for exceptional fabrics, trimmings and hardware at a value-conscious price point. We love working with Trend and are proud to carry their line in our store,” adds O’Sullivan.

The Trendiest Customer designation was awarded to 32 retailers nationally, and Drapery Street was the only recipient of this honor in all of Indiana and Michigan. “What sets us apart is our ability to design with both trends and value in mind delivering beautiful shades and draperies that are trend classics. Our customers value fashionable, stylish designs, and with the recent addition of our extra space, we have been able to showcase more of Trend’s unique styles,” says O’Sullivan.

The textiles and design industry changes quickly as new looks and technologies emerge. “From emerald greens to bold floral prints, velvet and menswear-inspired patterns, Trend has incredible offerings that are on point with the styles our designers and clients want for 2017,” says O’Sullivan. 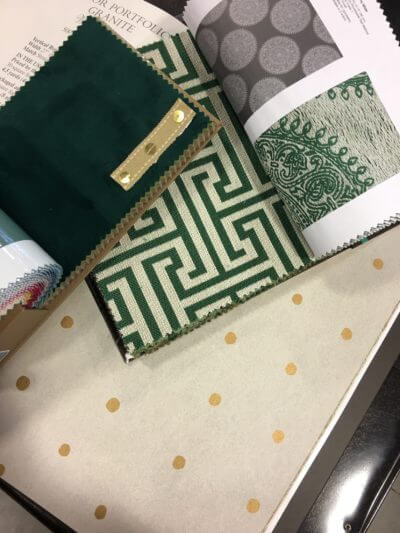 Emerald and gold designs from Drapery Street are on trend for 2017.

You can find photos on Instagram with the hashtags: #10YearsofTrend and #trendfabrics. You can also follow Drapery Street: @draperystreet and Trend: @trendfabrics.